In 2012, Bollywood stories did a wonderful job of bringing the backyards to the fore! It is a common complaint that movies here tend to be based in an urban setup. These do often strike a  chord with the audience in the hinterland, as they have an escapist and aspirational elements to them. Simultaneously, movies with story-lines based in the mofussil do not usually appeal to the urban audiences. This seems to be changing in the past decade and 2012 is an excellent example of strong stories based in a not-so-urban/ rural setup and being appreciated all the same for their content.

The chief example of this was Gangs of Wasseypur which rode into the hearts of viewers from Cannes to Chennai!

The year really belonged to the Anurag Kashyap school of cinema. Movies from this camp are known for the realism in their stories, taut scripts, lack of routine drama, among other nuances. What mainly separates films from this school as that of the Vishal Bharadwaj school of cinema is: their treatment. Here’s a quick run through of the former’s outputs of this year which also perfectly fell into the category of strong story-lines based in non-urban setup with rustic and sharp dialogues to the boot

Irrfan! (exhale!) Kudos to Tigmanshu Dhulia for sticking his neck out and making such films that give us an unadulterated feel of reality, free from the crutches of unnecessary dramatic inputs.

Underwhelming. That’s the only word I’ll use to describe this film. For a critique please check out http://filmanalytique.blogspot.in/2012/06/shanghai.html

And for layers you didn’t realize, hop over to our Lady at http://dolcenamak.blogspot.in/2012/06/shanghai-highriser-but-not-quite.html

The lesser said, the better!

I saw the first film THRICE in a cinema hall! And each time I went back with newer nuances which I hadn’t noticed before. GOW-I is my favourite half from this nearly 5-hours long work of cinematic breadth and depth! For me, GOW-2 was quite linear and not very engaging, psychologically.  The dialogues in GOW-I are to-die-for! Despite being sexist at many points, they neatly represent the under-currents of a man-woman equation in different relationships!

Women of Wasseypur had made me want to write an exclusive piece on them …a venture I never got down to actually typing, sadly!

While I do get that the director was attempting an absurd comedy, this one ventured into inane territory at many points in its running time!!! The only salvaging factors were the songs, Rani’s on-screen histrionics and Prithviraj’s brooding face and torso!

SHORTEN THE FILM’S NAME, to begin with!!!!!!! A sweet film filled with moments of light-hearted humour without any innuendo. And while we are at shortening the title, the makers could also reduce the running time by 20 minutes!

It’s a film about love and relationships with food being the connecting link. The film also beautifully portrayed life in Punjab, including migration and separation while thankfully skipping the boisterous Punjab portrayed in the Chopra-Johar films!

The three films from AKFPL struck me being in dire need of being cut little short to maintain the pace and interest. Hence, I wish Mr. Kashyap would invest in better editors for the future films coming out of his stable!

Ishaqzaade also falls into this niche of bringing back-to-the-fore group. Comments on this film are made in the section after the next. 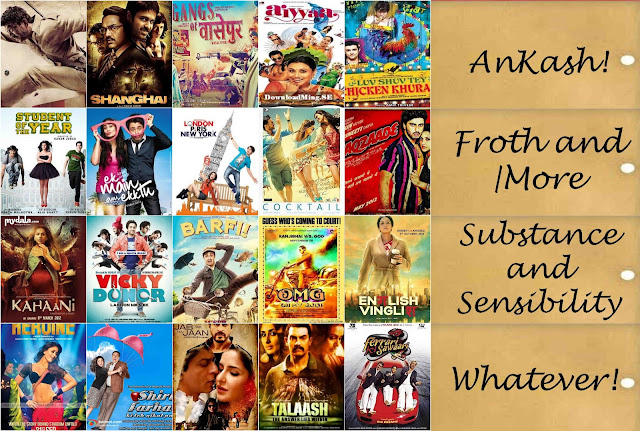 The first film I saw in the new year. Disturbingly sexist it definitely was, but was spot-on in its representations of political equations and rivalry across . This was a microscopic representation of the political battles our ‘representatives’ wage in the industry of ‘democracy’.

I went to watch this movie for Habib Faisal and found his traces in many elements of the film, primarily in its dialogues! Can’t wait for his next film!!!

PS: Arjun Kapoor can surely do rugged/uncouth, but can he do suave? Aurangzeb will show us what else can he do, apart from showing off his stretch marks on the big screen!

more on it by me: http://vichaarkhaana.blogspot.in/2012/05/ishaqzaade.html

A well-written story where people and cities merged as conspiratory characters to give us a taut thriller. By now reams have been written about how Vidya Balan is changing the force of the ideal-typical Hindi film heroine. I’ll refrain from treading that thought and put out a word for Sujoy Ghosh- in between the much appreciated Jhankaar Beats (2003) and Kahaani, HOW could you even conceive of peddling unbearable works like Home Delivery and Alladin?! wish the creativity would be more consistent!!!

Brownie points for making his love for so palpable through this work!

First ‘froth’ of the year. And that is increasingly becoming Dharma Productions’ trademark, barring the occasional Agneepath!

A much better rom-com to accompany the frothy EMAET. Just that this one gave the characters more agency and let them go through phases to eventually reach where they do.

Our Lady of Dolce and Namak has a classic retort for this one! Read it here - http://dolcenamak.blogspot.in/2012/03/lets-face-it-theres-no-such-thing-as.html

Again, will stay away from the morality-based debates that this film fuelled for long! SO much so, that the stunning DP went on to say that we just showed what is and "not the way perhaps should be"! (http://www.openthemagazine.com/article/art-culture/the-vibes-of-deepika)

In defense of this film, please read http://dolcenamak.blogspot.in/2012/07/in-defense-of-veronica-and-imtiaz.html

My main aim of going for this film was to see if John Abraham’s actual intelligence shines through in his choice of script when turning a producer? Shine it certainly does!

Shoojit Sircar has excellently used his skills as an adman to create product that is a crisp comment on our life and times without being preachy or repetitive, ever! This was the only film that didn’t make me feel like it required better editing.

Films produced by Vidhu Vinod Chopra usually tend to strike the right balance between good content and emotional appeal. This venture lost out some steam by not striking that balance enough and tilting to the wrong side.

I was very excited to see Bela Segal’s first film as a director. While the story had a lot of scope to pack enough punch, Bela’s treatment made it a near dud! Even Farah Khan’s spirited debut could not salvage this ship of aged romance!
OMG!

All the balances for a “good” film were struck just right! Now, if only Akshay Kumar wouldn’t indulge himself to THAT much screen-space, just because he’s the producer! (an issue that pricked me even while watching Cocktail (Saif, in this case)!)

A badly made film with no script or story for a backbone. It was a copy of scenes from Bhandarkar’s previous films and some (rumoured) real-life incidences…all adapted to the ‘filmy’ setup. Read Raja Sen’s review for the accurate picture - HTTP://WWW.REDIFF.COM/MOVIES/REPORT/REVIEW-HEROINE-IS-UNBELIEVABLY-TRASHY/20120921.HTM

For a quicker idea of how bad the film is, check out http://mumbaiboss.com/2012/09/24/the-vigil-idiot-heroine/

Saccharine OD. I won’t venture into a discussion on the inspired/ copied allegations leveled against this film. It could certainly have done with sharper editing and little less self-indulgence which lead to repetitiveness in narrative.

Saw it only because Yash Chopra passed away and I had never seen ANY of his films on the big screen!!! This film bears his trademark ALL through. The lyrics don’t sound like having spouted from Gulzar saa’b’s pen, the songs don’t sound like ARR was given a free hand or that he was being sincere. Won’t criticize this one, as YC’s soul may writhe in grave!

Hence, for a crisp take on this swan song, please have a quick look at http://mumbaiboss.com/2012/11/15/the-vigil-idiot-jab-tak-hai-jaan/

Aamir Khan kept us waiting for so long just to turn every character in this film into a spirit! Rumour has it that this film was drastically altered from its original track after Kahaani came out. Tch!

“Stylish Froth”. I live-tweeted while watching this film and one of the tweets during the middle of the film read- “SOTY: Rodent of the Year?!”

And you simply CANNOT miss this :

PS: Alia needs to lose a lot of her baby fat!

The year also had some absolutely beautiful music courtesy Mr. Trivedi. He has truly arrived in Bollywood! His works of the year include Ishaqzaade, EMAET, English Vinglish, Aiyyaa A-N-D LSTCK! From foot-tapping (Auntyji), to folk (Sava Dollar), to catchy (English Vinglish), to sweet (Main Pareshaan, Farrukabaadi) ... he's given it ALL! need we say anymore??!!!
--

(All images have been lifted from Google Images. Apologies for not citing each!)

at 11:06 PM
Email ThisBlogThis!Share to TwitterShare to FacebookShare to Pinterest
Labels: सनीमा