l The Lines Are Drawn…l

(*SPOILER Alert* this is not a review. Some implied puns of the film are ‘explained’ here.)

I could launch into a monologue of how much I love VB and the ability to look past the obvious and appreciate the inappropriately-titled Matru Ki Bijli Ka Mandola (MBKBM). Instead, i suggest you read Raja Sen's on it. 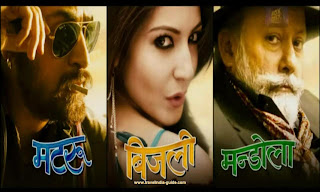 What I will rather do is to claim that I could have walked into this movie during the interval and watched the proceedings without itching to get any info on the first half. Seriously! Come on, VB...आपका क्या जाता अगर आप हमारे time को थोड़ा और value देते और इस picture को ठीक length की बनाते ?! (exasperated translation – ‘what would you have lost had you appreciated the value of the viewer’s time and made this picture of the ‘proper’ length?!). Why indulge yourself SO much, man?! Just because I have instituted a whole school in the name of your style (and camp) of filmmaking, does not mean you’ll try my patience like this, no?

Once I have drawn the lines between the significance of first and second halves of the film, it is easier to enjoy what VB has served us.

This is not escapist cinema. It is a wisely-written topical satire with multiple references to the times of our lives lurking from every frame and most dialogues. Two best examples of such dialogues are one each delivered by Shabana Azmi (personal development = country’s development) and Pankaj Kapur (I dream of development…).

VB even gives us acceptable labels, replete with foul adjectives. “Commie B*****d” and “Bourgeoisie B***h”. The world consists of only two kinds of people. Just remove the gender-specific expletives at the end, and there we are! Those who claim to be walking the grey middle path are only hiding their true colors. I certainly know the side I am on!

I absolutely LOVED the humour. They jokes are small, not in-your-face and don’t make you laugh-out-loud. Mostly, they sting…but there are enough of them to keep the grin coming back. I got them all… ALL! Thank You, VB, for doing a film that appreciates our understanding of subtlety and does not insult the intelligence by making stuff so annoyingly in-your-face. This is exactly like what we say in Hindi - "रेशम से लपेट कर मारना"! (to wrap in silk and whip!). any intention of political correctness is thrown to the winds, as the dialogues do NOT refrain from names-dropping for conveying the messages loud and clear. everyone from the Ambanis to Sheila Dikshit to the 'babalog' of Indian politics make an appearance in the lines!

Apart from the obvious ‘Mao-Lenin’ references that EVERYONE got, there were some others like: kursiyaan: chairs (political power): cheers!, the “tubelight” lighting up when Badal FINALLY gets his Mum’s hints at ‘Bijli’, and many more that I’ll continue to relish in my future viewings of this film.

The title of the film is unnecessarily long. While Jitesh Pillai may have found it interesting (aeons ago on Twitter, and he speculated it to be Gulzaar Sa’ab’s influence on VB), it didn’t really serve ANY purpose. This film is all about Mandola. The man and the village. Matru and Bijli are supporting characters. They didn't need an endorsement in the title of the film! Nobody would have accused VB of being partial if he had gone ahead with only “Mandola”, after all, that is the only word that has an actual pun element to it!

Arya Babbar does a good job of the moron he is supposed to play. The director gives us just enough seconds to exclaim “gadha” (ass/donkey) when Badal asks Mandola for how will he look in either choice of sherwani for the wedding and Mandola says “you’ll look the same”!

Imran Khan tries hard to justify VB’s choice of casting him and succeeds only till the extent where he can’t convey the ruggedness of a Haryanvi to us. First we are told he studied law. Then JNU is thrust into our face, which will make most people to conclude, incorrectly, that he studied law at JNU. Since that is technically not possible, VB, why the mashup? would it take too much footage to give a clear idea of where he studied law?!

Anushka, my love, does not get much meat to sink her teeth in, :-'(, but shines in a pre-climatic scene meant to portray her helplessness as a pawn in the game of greed and gain.

Shabana Azmi is ‘delicious’ ;-)! Her last outing in a VB film was the creepily wicked witch-act in Makdee, a decade ago. To see traces of that wickedness in some of the scenes here is delightfully satiating!

Pankaj Kapur takes the cake…A-L-L of it! He is the heart, soul and spine of this film. I’m so smitten by his character and acting that I’m not even qualified to sing his paeans here!

So unqualified I feel that I’ll not try to compose original lines for conclusion. I’d much rather cite Mayank Shekhar for that…

In portions, the film becomes then a somewhat literal, Leftist pamphlet, starring one of the leading men of romantic movies (Imran Khan), coming out of the most Right Wing of all cinema industries (Bollywood), funded by an American Fox Studio, owned by the Australian magnate Rupert Murdoch. This is fine subversion on the part of the filmmakers still…But then that’s also the beauty of capitalism, which this fairly intelligent, amusing take acknowledges by its very own existence.
Read this entire piece here: http://thew14.com/2013/01/11/mayank-shekhars-review-matru-ki-bijlee-ka-mandola/

PS: I chose this image ONLY because Anushka looks smoking in it! Yes, I love her THAT much!
at 8:00 PM
Email ThisBlogThis!Share to TwitterShare to FacebookShare to Pinterest
Labels: Worth Wondering..., सनीमा