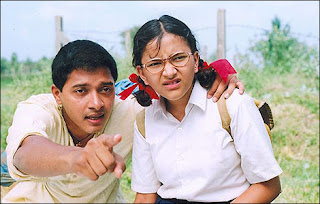 NINE weeks after the much-acclaimed film of Nagesh Kukunoor “IQBAL” was released, I managed to catch it at one of the rare A Grade single-screen theatres in my city. There were a few incidents mired around the aforementioned event. But, I’ll stick to the movie, as these so-called incidents, are worth overlooking at!
I haven’t watched any of Kukunoor’s movies before. But, of course, I have heard/read as lot about him. Also heard a li’l bit of him (giving some sound bytes before “IQBAL’s release) and I must say, he speaks good Hindi. No airs about it!!
*As everyone raved, I must say, it was a really nice film. One, which can be safely slotted into the ‘intellectual’ category. I had an instinct long before the movie released that this is a film worth watching, considering the fact that I prefer only intellectually stimulating ones, once in a blue moon that I watch any!

*Elahe Heptoolah, if I’m not mistaken is the director’s lovely wife. Well, she apart from being the Exec. Producer of this film, also shares one of the other credits, I don’t recollect which!
*Shweta Prasad (as everyone including yours truly observed) is a real prodigy. I’ll not be surprised if Nasseruddin Shah picks her up to essay a character in any of his future productions, plays to be specific.
*Also, I have never seen Girish Karnad in action before. Yes, that includes not being an audience to any of his plays, previous films and any other artistic expression, whatsoever. And on the basis of all that what I had read about this man, I know, I have missed out on a lot: (.
I fervently hope, that he is around, when I’m in a position to watch him live. I’ve just read his one of his plays (Tughlaq) and heard a production of something, which had to do with the Kid Krishna.
*Another thing that caught my attention was KK’s vocals. Voice, as it is said, matures like old wine……okay wait, I’ll change that analogy. (I believe in preaching what u practice, and I’m a teetotaller!). So, lets juz say, voice matures over a period of time. As I (and most of us) have seen, or rather, heard him from “Tadap tadap” (Hum Dil De Chuke Sanam) to “Aawarapan banjarapan” (Jism) to now…”Aashayein”. His other singles like “Pal”, “Yaaron dosti”, etc. obviously added finesse to his repertoire.
* It was mentioned, Salim-Suleiman have done the background score of this film. The first time I heard about them, was when they worked with VIVA (Channel-V Popstars I) for “Jaago Zaraa”. After that, they’ve been consistently doing backgrounds scores for a lot of films and have also done music for a few films. Ek Haseena Thi was one of them?? I specially liked it, when they had a India Today did a spread on them featuring their state-of-the-art studio!!

*Lastly, many of the frames of Iqbal resembled those of Swades!! And that particular scene where Shreyas and Shweta or rather Iqbal and Khatija first enter’s Mohit’s house, it looked like a shorn version of the scene preceding the one in Sarfarosh where a lamb enters Naseer’s maikhaana……or wateva that was!! I’m sure, it wasn’t a maikhaana because, he was doing riyaaz out there!!

*A-N-D….i came across the quote “If u really want something, the universe conspires in your favour to help you achieve it.”, in the Alchemist. Will someone please enlighten me about its origins, considering the fact that it's an oft repeated dialogue in the movie?
at 12:39 AM 1 comment:
Email ThisBlogThis!Share to TwitterShare to FacebookShare to Pinterest
Labels: सनीमा

Man is only a strand in the Web of Life
He is not the WEAVER of the web.
If he does ANYthing he does to the Web,
it'll surely affect him:(
at 1:58 AM No comments:
Email ThisBlogThis!Share to TwitterShare to FacebookShare to Pinterest
Labels: Worth Wondering...