The CAA-NRC-NPR matrix has rattled the Indian citizenry out of a stupor against government's steady efforts to further marginalise minorities and deepen the ethnic schism within the nation. Three months since the CAA was passed, rules for its implementation have not been drafted yet. Only recently did the Home Minister stated in Rajya Sabha that the category of “doubtful citizen” will not be included in the NPR. Just six days after this statement, in response to the petitions challenging the CAA, the government filed a counter affidavit justifying its intentions for NRC.

And what do we make of the nation-wide protests against the CAA-NRC-NPR? Have they managed to transcend into a movement? At the intersections of this state-citizen logjam lie the various women-led sit-in protests across the country, foremost being the one at Shaheen Bagh in Delhi that has completed three months. 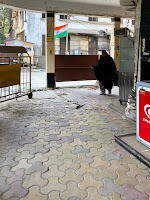 In that vein, Mumbai Bagh is going strong on its 50th day and some aspects are hard to miss. For a majority of the women who have actively participated in the sit-in, it has been a unique experience in transcending from the private sphere to an exceptionally public one and turning their personal into political. As I walked into the site today, what struck me was the clear lack of obstruction by police. No table parked in the narrow alleyway to generally hamper movement. No uniformed police personnel manning those tables with thick registers, coercing people into entering their personal information before entering the site. 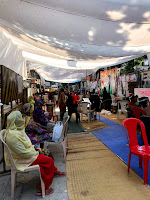 After more than a month of struggle with the weather and police, the women finally managed to get a temporary shed on their heads. Many of them have been subjected to surreptitious queries from plain clothes personnel and some have had the unpleasant experience of having a notice from the police for “unlawful assembly” under CrPC's Sec. 149 delivered to their doorsteps. At the site, the women have found new strength in networks that have ignited their sense of pride, association and assertion of their physical and socio-cultural selves in this 100-mt stretch of a road ironically named “Thandi Sadak” (literally, cold street).

It has grown into a struggle between proudly receiving the notices on site from police, meeting elected representatives to present their case and rushing home in time for “supply” water-related chores. This is as much about claim-making on the State as it is about utilising available “official” mechanisms of asserting citizenship. As the agents of the state actively ignore or malign the protestors, especially on account of their religious and gender identity, it is an act of abjection of their very identity as “Indian” citizens. Amidst all this, our good old patriarchy keeps rearing its ugly head, causing conflicts that are sometimes public and violent but mostly private and restraining.

Young girls, especially the unmarried ones, are warned by their parents to not be “highlighted” by visibly participating through sloganeering and organising allied activities at the site. No one says that it will affect their marriage prospects but that’s going to be an interesting development to track in a few years, or months. Conversations with women across a cross-section of ages revealed their intent of staying at the dharna until CAA is revoked. The big question remains ...क्या ये महिलाएँ धरने से आंदोलन तक का सफ़र तय कर पाएँगे?

at 10:00 PM No comments:
Email ThisBlogThis!Share to TwitterShare to FacebookShare to Pinterest
Labels: Events, Places