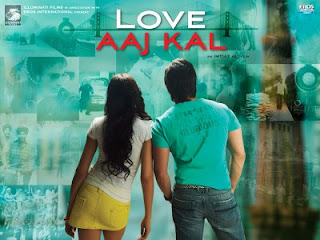 Put together a few real characters. Mix it with some logical [or so-called?!] sequence of events. Stir in a li’l bit of drama. Garnish with a peppy sound-track. And VOILA! What have we?! A veritably identifiable product acting as a mirror to OUR [read as educated, ambitious, globalised and err.. ‘realistic’] times.

This is a story spanning 4 years in the life of a pair of young adults, who dare to dream and can go to any lengths to convert them into reality. ANY lengths? Well…that’s what the climax suggests! Some dream are clear and obvious, others are hazy. It’s the hazy ones that mislead us into believing that ONLY the dreams which are crystal clear are meant to be realized, not others.

LOVE AAJ KAL is a some-what poignant story of MEERA and JAI [MJ!] who are fair enough to breakaway from ‘love’ to pursue their professional dreams. But do they REALLY take a break?! The movie has a contemporary feel and is a telling tale of the times that we live in. it’s all about being ‘instant’! In the pursuit of this instant gratification, one may push to the back sources which seemingly create obstacles in the achievement of our dream and consequent gratification. Ironically, it IS these sources that we derive support from, not just instant but also long-lasting!!!

The lead stars are affable and the on-screen chemistry between them is striking. The dimpled and dainty damsel proves a striking match to the effervescent Khan. Saif, of course, has mastered this art from his first solo hit “Hum Tum”. Only JAI is more fickle, and obviously a very ‘today’ guy!!! He looks a li’l old for his character, though.

Deepika, as always, is lovely and a pleasure to watch…whiff of fresh air! Duds like CC2C [she worked very hard for it] n Bachna Ae Haseeno [a self-proclaimed hit] have done little to stop this beauty from establishing a firm foothold in the film industry. The styling for her character [by Anahita Shroff Adajania] is true-to-times. A very wearable fashion and minimal make-up, add more certainty to the reality of Meera’s character. My favourite is the peach-coloured chiffon wedding-saree. Absolutely STUNNING..both..the outfit..AND..the wearer!!! but even before that, there is the adorable yellow mini [see image]...this one's on top of the 'to-buy' list!!!

Dialogues of the movie are crisp and devoid of any OTT theatrics, a characteristic feature of most previous hindi movies. Times have been successfully shown changing via and similar movies.

To conclude… a VERY watchable flick. though the first half of the movie is quite slow and not much happening...it's picks up well in the 2nd half! Usage of streety hindi dialogues in some places adds oodles of authenticity to the on goings. The old joke of ‘mango man’[aam aadmi] has been immortalized on screen as ‘mango ppl’ [aam junta/log]!

One song which perfectly suits the gist of this movie... MY HEART WILL GO ON...

at 9:54 AM
Email ThisBlogThis!Share to TwitterShare to FacebookShare to Pinterest
Labels: सनीमा