Enthiran has hit the bulls-eye in south with visitors thronging to the theater like crazy. Most are, of course, fans of Rajnikanth and his antics, the remaining minority is rooting for the special effects. Being the costliest film made in , it’s also been dubbed in Hindi as Robot and has garnered quite a few accolades across the country. 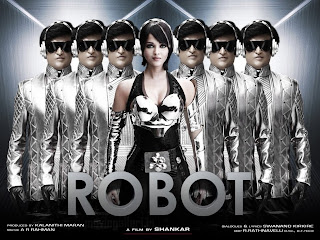 The blogger would not like to ‘review’ the film as that is something each viewer can take an independent call on.  Instead, mentioned here are some random stuff that were noticed while watching the film:-
The director of this tech-fest, Shankar, is being touted as ’s Cameron. The blogger doesn’t agree with this line of thought. Somewhere, ‘Avatar’ rang a bell which is not the case with 'Robot'. Excellent graphics n special effects make not a great film.
at 2:38 AM
Email ThisBlogThis!Share to TwitterShare to FacebookShare to Pinterest
Labels: सनीमा