A YEAR AT THE MOVIES
In the Hindu way of life, there is a belief that what you do on the first day of a new year, keeps recurring (in an exact or similar manner) all through the year. Year 2010 proved that right for this blogger! I began this year by watching the film 3 IDIOTS on the 1st of January. What followed was a yearlong viewing of some amazing films, topping it all with a bumper month in December! I’m sure I missed out on some gems, but I’m glad with whatever I could manage between classes, assignments and exams. Mentioned here are short comments on all the new movies I saw in 2010:
1) 3 Idiots 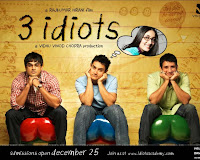 An endearing story of belief, friendship and bonding that stood the test of time. Directed by the man behind the Munnabhai films, Rajkumar Hirani, this one had everything going for it! From an amazing script (written and revised diligently by Abhijat Joshi and the director) to an encouraging yet taskmaster of a producer (Vidhu Vinod Chopra) to a brilliant cast (with Aamir Khan’s star-power and histrionics adding to the galaxy of performers)! It was the ideal combination of Bollywood masala (replete with a rain dance routine!), emotional saga and brains (real gizmos from IIT).
My only grouse with this film is a small detail which skipped the eye of the assistant checking for continuity. The scene: Javed Jaafri is being threatened with his father’s ashes being about to be dropped in the commode. In one shot, Sharman Joshi drops the lid of the container in the loo. Few shots later, the utensil is returned to Jaaferi, with the lid back on it!:-P!
2) My Name Is Khan
A sappy yet topical KJo film that I took my parents to watch on their wedding anniversary! Review can be read here…http://vichaarkhaana.blogspot.com/2010/03/mnik.html

3) Teen Patti
A promising idea which was failed by it's lack luster execution.
http://vichaarkhaana.blogspot.com/2010/03/teen-patti.html


4) Atithi Tum Kab Jaoge
An utterly emotional and sweet family film, without the usual OD of melodrama! Took my Mum along for it, review can be read here…http://vichaarkhaana.blogspot.com/2010/03/blog-post_11.html
5) Inception
It was G’s ‘goodbye’ film! Review can be read here…
http://vichaarkhaana.blogspot.com/2010/07/reversal-of-real.html
6) Udaan

A lovely work of art showcasing Vikramaditya Motwane’s passion for story-telling. Kudos to Anurag Kashyap for backing it! My favourite part is the climax which shows the power of education and how knowledge can be used for making our lives so much better, emotionally!

A telling commentary on our times and the state of our lives. Acute portrayal of manipulation by the media and effects of unemployment. Hats off to Anusha Rizvi for the crisp script and direction. Songs of this film were an absolute winner, too!
8) Tere Bin Laden

The sleeper hit of this year! The film undertakes many political issues which are treated in a light yet impressive manner of story-telling.
9) Robot
*yawn* Review can be read here…
http://vichaarkhaana.blogspot.com/2010/10/robot.html
10) The Social Network
The less said, the better! Brilliant examples of super-smart and sharp writing which shines through many of the dialogues in this film.
11) Do Dooni Chaar
HABIB FAISAL! OMG! I can’t stop gushing over him and his craft! This is an extremely endearing, warm, sweet and a very identifiable film.

I was really looking forward to watching Khelein Hum Jee Jaan Se, Guzaarish, Band Baaja Baaraat and Tees Maar Khan. Saw all of these except the last, because I realised in the nick of time that Shirish Kunder is a hopeless story and script-writer. Wish he’d stuck to only editing reels! As for the others…

A sad attempt by Ashutosh Gowariker to give us a slice of history. This film could do with a lot more sincerity and an interesting screenplay. I went to watch it in its second week and there were only 5 people in the theatre to begin with. When the film ended, there were only 2 people left, one moi and and another old bearded man! 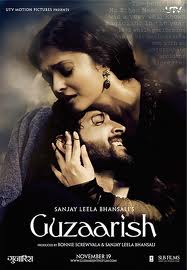 Saw it immediately after KHJJS…within a gap of 10 minutes! This was the film’s 3rd week and there were about 50 people in the hall…not bad for a film declared as ‘flop’! My main aim of watching this film was to see an SLB work on the big screen. I wanted a sense of his craft and relish the colour pallet he employs. Of course, he has publicly proclaimed that he is drawing more inwards now and therefore the visual splendours of a Hum Dil De Chuke Sanam or Devdas will no more be presented to us. My bad luck for not having seen those on the big screen!
This film is a warm tale of struggle for survival propped up by restrained love and dedication. I came across many people who didn’t like it one bit, and others whose heart-strings it chugged. To each his own, then!
Band Baaja Baaraat 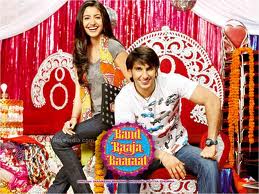 OMG! I LOVE THIS FILM! I COULD DIE WATCHING IT! My original intention behind wanting to watch this film was Anushka. Yeap, that’s right! It’s her that I was watching out for! While the promo of this flick was not well-cut, I was super-tempted to see Anushka’s expressions on the big screen. And boy, what a PATAKHA this girl!!!


Anushka, Ranveer and Maneesh Sharma are the B-E-S-T things YRF have offered to us is a REALLY L-O-N-G time!!! Possibly the last time I was super-impressed by a YRF offering was Chak de! India, and that was certainly very long back!


A big round of applause for Habib Faisal for the brilliant screenplay and scintillating dialogues! Perseverance pays..and his stint at YRF is an excellent illustration of it! From patiently writing script/dialogues for some of YRF's lousy and expensive films...his patience paid and he got the perfect opportunity to showcase his skill with the words to us in BBB! Apropos!


BBB has the crackling mix of a realistic story, brilliant screenplay, crispy dialogues, fantastic execution and an absolutely stunning cast (lead + supporting). Nothing to complain about in this flick! I’m sure you get the drift…I seriously can’t stop hyper-ventilating about it!
The best thing about 2010 is YET to come, though!!!!!
Thanks to a tweet by Rajeev Masand, I stumbled across this Bollywood-lover -http://dolcenamak.blogspot.com- who understands our films in ways we don’t even imagine them to be! I have fallen in love with this Lady, and don’t be surprised if my posts in the future keep referring you to her posts!
at 9:41 PM
Email ThisBlogThis!Share to TwitterShare to FacebookShare to Pinterest
Labels: सनीमा