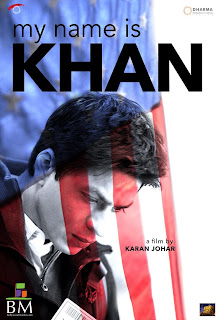 My Name is...
The Great Bard had famously said… “WHAT’S in a NAME?!” Well, if we were to look in the contemporary world around us, there’s a LOT in every name. If it wasn’t enough in India, for sur-names to symbolise people’s caste and the whole baggage it carries, we now have a terror-struck globe. MY NAME IS KHAN is a contemporary tale of how there’s a LOT in a name.


This is a refreshingly different movie from the DHARMA stable. Quite a respite from Karan Johar’s usual candy-floss style of cinema with designer brush strokes! This one’s designer too, but it got a lot more depth beyond the beautiful visual imagery! This film marks the turning of a radically new leaf in the careers of both SRK n KJo. It can be read as both these powerful people taking a stand in their larger responsibility towards the society at large.


It’s the journey of Rizwan Khan, in a world not-so-kind to differently-abled people. And matters get worse after the WTC is perished in the 9/11 air attacks. Khan suffers from Asperger’s Syndrome. He cannot look straight into the eye while talking, stammers a little, has slight learning difficulties and other pet peeves but is resolute, nevertheless! The film keeps the viewer riveted, though the second half is a tad stretched.


The scene which struck the blogger was one where Khan throws his pebbles at a doctor in a mosque. This is symbolic of the stoning of the Satan, an integral part of Islamic tradition. The subtle incorporation and powerful portrayal of such a lore is deeply appreciated.


Kajol is as endearing as ever, and the lovely long jackets enhance her persona. SRK, for a change, REALLY goes way deep beyond the character’s skin. All other actors have done a fair job of justifying their roles. This film is a good example of the triumph of the just human spirit over all forms of prejudice and injustice.


In conclusion, this blogger believes that it is important to record the various happenings in society, in a variety of perspectives. Cinema is a very powerful medium to store what is tomorrow’s history. An array of narratives projecting the impact of the one common event is extremely necessary to have a rounded picture. KUDOS TO KJO n the entire MNIK team!:D!
at 10:28 PM
Email ThisBlogThis!Share to TwitterShare to FacebookShare to Pinterest
Labels: सनीमा