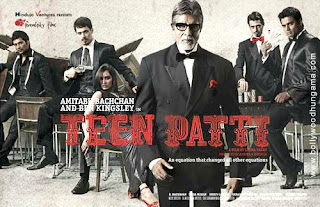 HINDUJA VENTURES has made inroads into the Indian film industry with their film, TEEN PATTI. Amitabh Bachchan is the show-stealer. It’s a click flick with a skewed script! First-time director, LEENA YADAV has not done a very good job of narrating this thriller. Many scenes have shoddy camerawork and do not establish the location well. Songs in the film are nice, but OUT OF PLACE!!! There is the Brazilian bombshell Maria Gomes gyrating suggestively in an item number.

The ‘Casting Director’ of this film should have been named the ‘Networking Director’. Most of the cast belongs to the ilk which hobnobs with the Hindujas in London and Bombay. So we have everyone from super-model Saira Mohan to writer Siddharth Dhanvant Shanghavi showing off their ‘acting’ skills in whatever screen time they get. Ben Kingsley is BIG waste with nothing much to do! Maybe he DID have a lot to do, at least to establish his character, but that go chopped off on the editing table!:P!

The rest of the actors, new-comers…do a not-very-convincing job with their immature acting. It looks like they’ve ‘learnt’ acting and are now off to show their skills in this movie! it’s a just-about-okay film. The blogger has been told that ‘21’. The original in English from which this flick is inspired, is a better watch!

at 10:31 PM
Email ThisBlogThis!Share to TwitterShare to FacebookShare to Pinterest
Labels: सनीमा